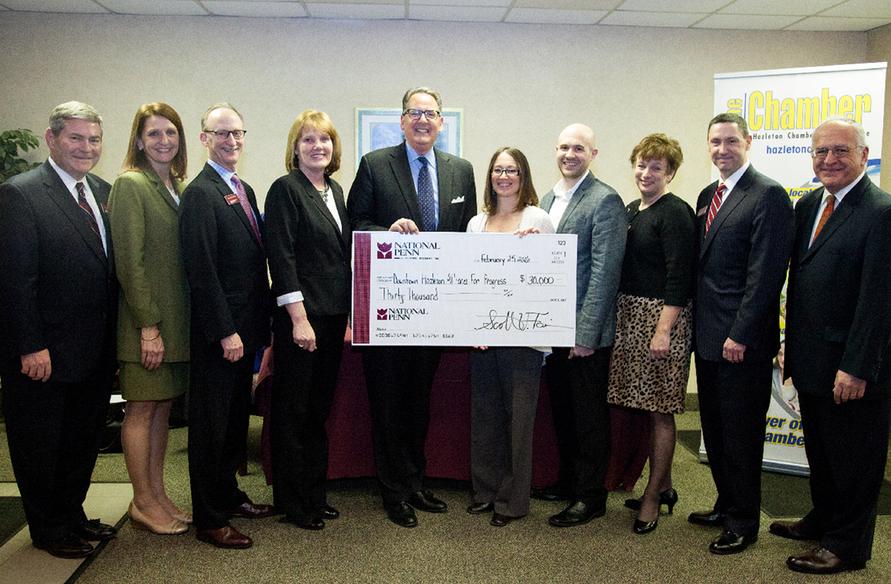 NATIONAL PENN BANK CELEBRATES COMMUNITY COMMITMENT
National Penn Bank hosted a Greater Hazleton Chamber of Commerce mixer on February 25, 2016 in their downtown Hazleton location (12 E. Broad St.) to celebrate the bank’s long-standing commitment to the community. Scott Fainor, National Penn President & CEO, addressed more than 70 participants at the event to recognize 76 years of Chamber membership, and highlight the bank’s achievements and its continued growth in the financial marketplace. He also provided an update on National Penn’s upcoming merger with BB&T, which is anticipated this spring.

In order to reaffirm their commitment to the community, Mr. Fainor also presented the Downtown Hazleton Alliance for Progress with a $30,000 donation from National Penn to support the organization’s mission of attracting new business and investment to the downtown. “We are very familiar with the work of the Alliance and the positive impacts it is having on the community. We are confident that we’ll receive a great return on our investment,” said Fainor.

This donation made it possible for us to exceed our fundraising goal and clear the financial benchmarks we needed to be awarded “Main Street” community designation from the PA Department of Community and Economic Development. Without National Penn’s donation, this designation would not have been possible.

With approximately $9.6 billion in assets, National Penn is a bank holding company headquartered in Allentown, Pennsylvania.  National Penn operates 124 branch offices throughout Pennsylvania, New Jersey and Maryland, including those in Downtown Hazleton, Drums, Sugarloaf, Mountaintop, and near the Laurel Mall.